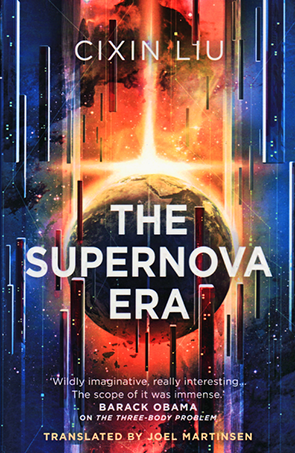 The Supernova Era is an earlier work by Cixin Liu, the Chinese author most famous for 地球往事 (Remembrance of Things Past) trilogy. It was first published in 2004 in China but this English translation didn’t appear until 2019. In an afterword, Liu reveals he started the novel thirty years before the English translation appeared, placing its genesis around the time of the Tiananmen Square Massacre. No reference to that event is ever made in the novel, not even in Liu’s afterword. Despite the many references to China’s ancient culture, there is almost no acknowledgement of Chinese history, either. In fact, there is more engagement with America’s past in the second half of the novel. What Liu does discuss in his afterword is modern China, which he sees as separating from traditional Chinese culture. Chinese traditional culture, he writes “used to have no sense of the future.” Modern China – China fifteen years after the original publication of this book – is “expanding rapidly, and people spend at least half, if not more, of their personal lives online.” Liu describes the reaction of China’s older generation, in which he includes himself, to modernisation, as one of “utter confusion”.

Liu’s afterword might be judged as an attempt to provide a contemporary interpretation of his work after the fact. But a more generous reading would acknowledge that the changes in modern China, whether they were the advocacy of democratic reform in 1989 (Liu has stated he thinks democracy is not right for China) or the technological and geo-political changes of the last two decades, that the generational gap that Liu describes is the likely outcome of rapid modernisation within a traditional culture. And this is the basis of Liu’s novel, which is a speculative.

Liu’s speculative premise is not a new one: what if all the adults were gone? There’s a kind-of-version of this idea in Orson Scott Card’s Ender’s Game, in which children are trained to battle an alien race. William Golding’s novel, Lord of the Flies, explores the dark possibilities of human nature when a group of school boys are marooned on a deserted island after their plane crashes. One character even mentions Golding’s book in Liu’s version of the story. And John A. Davis’s 2001 animated feature, Jimmy Neutron: Boy Genius, sees children freed from the strictures of their parents when they are abducted by aliens, only to find that things aren’t as fun as they initially anticipated. Liu’s work has elements of all these stories. It begins with the death of a star, three times the diameter of our own Sun, only 8 light years from Earth. When the radiation of its explosion eventually reaches Earth, everyone is exposed to lethal doses of radiation so intense, that there is no escaping them. Within a year, it is estimated, everyone will die: everyone, that is, except children around 12 years old and younger, whose DNA is robust enough to repair itself. And so begins a desperate effort to train children for the positions occupied by their parents: for everything from street cleaners, to engineers and even national leaders. In China, as is done in other countries around the world, geopolitical scenarios are conducted on a large scale to select these leaders. When the year ticks down the adults retire to assembly points where the children will not have to witness their deaths. The epoch clock, a screen with pixels representing the assembly points with still-living adults, slowly blinks to darkness, and the Supernova Era, an era in which the impetus of history will be changed by the different priorities of children left with the keys to the world, begins.

The Supernova Era is more compact than Liu’s more famous trilogy. But reading it now gives a sense that it is not as cohesively realised as that other work. Liu uses scientific concepts effectively to build the tension around the implications of the supernova, and the consequent attempts to save human society and keep its knowledge and achievements intact. Joel Martinsen’s excellent translation captures the urgency are peril. But the supernova is a catalyst for the narrative and the subsequent drama after the death of the last adult merely a logical step that Liu must address. So it is some time before Liu gets to what is clearly the real point of his novel: what children would choose to do unrestrained by adult supervision? And how different are the amoral (and sometimes ludicrous) decisions made by children, to the world of adults from whom they have learned? Many Chinese children succumb to excess drinking. And they build a virtual theme park that spires into space, and foolishly think they will be able to use their vast country to achieve their vision in reality. In America, the children break out weapons, and society degenerates so much that when a meeting of the UN is called, delegates have to wear bullet proof vests and be escorted in armoured vehicles lest they be picked off with high-powered weapons for a bit of fun. And worse, the entire world bends to this American sense of ‘fun’. When Antarctica’s climate shows signs of becoming habitable due to the effects of the Rose Nebula – the radiant body left by the supernova – it is America that suggests a series of war games (or ‘game wars’), literally a new version of the Olympic games, including judges and strict rules, with a series of events based around types of weaponry (tanks are favourite), and losers dying very real deaths.

This is where it is important to remember the length of time between Liu’s novel first being published in Chinese, and his writing the afterword for the English translation. The China of the novel is not as powerful as it is now. The struggle of the Chinese children to maintain their society reads like a metaphor for the changes China is undergoing. It is impossible to claim a definitive understand Liu’s position, though: whether readers are meant to understand the danger of breaking too readily with the past; or whether it is a speculation about an emergent Chinese culture. Or both. Or something else. America, in the novel, is powerful and reckless, and it is easy to imagine through the narrative the wariness that ordinary Chinese have about the superpower at the end of the Cold War. The mindless resort to weaponry for fun reads very much like a satire on America’s obsession with guns, a right guaranteed by their Second Amendment.

At times it easy to forget that the story is about children, since their knowledge and skills often appear equivalent to their adult forebears. But sometimes, even during political machinations, the nature of children breaks through. President Davey witlessly suggests himself as a suitable husband for the as-yet-to-be-chosen new Queen of England (who will be selected for her looks), and punches the British Prime Minister for rejecting the suggestion of more missiles in England. And the violence of the Olympic Games is attributed to the nature of children, but their bizarre rules highlight the codification or war in our own era, and how rules may help us accept what should, in all humanity, be unacceptable. But most telling is the children’s rejection of the adults’ world in favour for a new era run under principles determined by themselves: swapping the principles of economics for that of play. In a world now ruled by children – a world of apparent abundance - the question arises, “If the ideal world was so close, why had they never made it there before?” The children’s adaptation of play to political and economic principles questions the accepted premises of our own ideological ‘certainties’, even the innovative principles of capitalism, while at the same time revealing the limited understanding the children have of the realities of their inherited world.

There is strange balance between this kind of satire and the novel written as history, penned by a future historian to capture the psychological impetus of the era and its many possibilities. As a result, the narrative is occasionally interrupted by firsthand accounts from the historical record. They offer vignettes of the period and the children forced to survive in it. Through this account, the narrative voice is revealed as a future adult. The world of the children can be studied, debated and written about, but it is an un-repeatable moment in history, and can never, now, be truly be known. To that end, the drivers of change in our own society – politics and technology – may be the uncertain future the novel attempts to dramatize, in which traditional social modes increasingly succumb to technology, commerce and globalisation. The Supernova Era isn’t as accomplished or as engrossing as Remembrance of Things Past, but it offers a fast-paced, highly readable, and even thought-provoking speculative world. 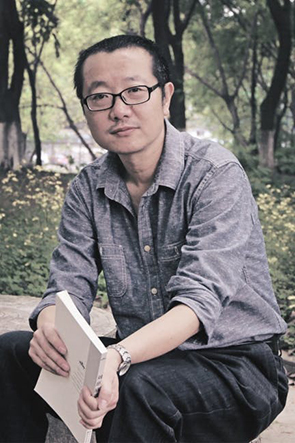 The Principle of Play

“For society as a whole, when the principles of play replace the principles of economics in determining the operation of society, it might produce tremendous innovation, releasing the human potential that was constrained under the former economic principles. For example, in the adults’ time, the majority of people couldn’t rationalize paying two-thirds of their life savings for a trip to space, but in the children’s world, most people would, under play principles. This would propel space travel to a pace of development equal to that of information technology in the adult’s time. Play principles are more innovative and pioneering than economic principles; play means travelling far, it means constantly finding out new mysteries of the world.”