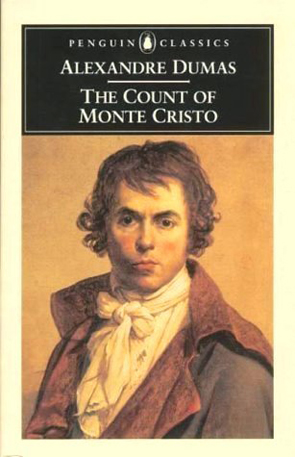 The Count of Monte Cristo

There are many characters in Dumas’s novel which spans over a thousand pages. Many only make a brief appearance, like the telegraph operator who unwittingly helps the Count set M.Danglars up to lose money, while others like Madeleine Caderousse, wife of the villain Gaspars Caderousse, are a minor character attached to another minor character. Some characters like Baron Franz d’Epinay, appear to be rather important in sections of the book (especially in the sequence in Italy where Albert de Morcerf first meets the Count of Monte Cristo) but have very little import to the story, apart from being Albert’s friend. The same can be said for M de Château-Renaud, another friend of Albert. I have chosen not to write an outline for these characters, however brief it might have been. Some of them can be seen in the accompanying Character Map, while many are too minor to appear there either. The following characters are essential to the story:

Edmond Dantes is framed by three men – M. Danglars, who is a profession rival, Fernand Mondego, who is a romantic rival, and M. de Villefort, a magistrate who sends him to prison to protect his own father from a secret Dantes might reveal. Dantes spends the next 14 years in prison. During that time he befriends another prisoner, Abbe Faria, who educates him and tells him the location of a massive fortune. When Dantes escapes, he uses the fortune to adopt a new identity – the Count of Monte Cristo – and to seek a slow and complete revenge on the men who sent him to prison.

Luois Dantes is Edmond’s father. When Edmond goes to prison Louis starves to death. This fact will contribute to the mode of retribution Edmond exacts on M.Danglars.

Villefort’s father, M.Noirtier, is a fervent anti-royalist. When Dantes returns from the isle of Elba where Napoleon is exiled, he bears a letter that could implicate Villefort’s father. Villefort is a chief prosecutor, and to protect his father he sends Edmond Dantes to prison for a crime he knows he did not commit. Villefort is eventually promoted as the king’s chief attorney. He once had an affair with Mme Danglars, which resulted in the birth of Benedetto. To hide their affair, Villefort buried the child alive. But the child was save by Bertuccio, a servant to Edmond Dantes (when he adopts the title of the Count of Monte Cristo). Dantes later uses this knowledge to help ruin Villefort.

Mme de Villefort is M. de Villefort’s second wife. She is step-mother to Valentine from her husband’s first marriage, and mother to Edward. While she outwardly promotes Valentine’s interests, she secretly hopes to obtain Valentine’s money, inherited from her grandparents and mother, for her own son Edward. To do this she begins a campaign of poisoning which leads to disaster.

Father to M.de Villefort, he is an anti-royalist who was once president in a secret society, the Bonapartist Club. He killed Franz d’Epinay’s father, General Flavien de Quesnal, after he refused to join the club. M.Noirtier’s past provides M.de Villefort his motive for sending Edmond Dantes to Prison, since Dantes carries a letter from Napolean that could incriminate Villefort’s father. M.Noirtier later has a stroke and is able to only communicate by blinking. Nevertheless, he manages to protect Valentine effectively from the machinations of her parents.

Daughter to M. de Villefort from his first marriage, Valentine has fallen in love with Maximilian Morrel. She becomes the target of her stepmother, Mme de Villefort, who seeks to poison her so that her own son, Edward, might eventually benefit from her inherited fortune.

Fernand Mondego began life humbly in the fishing village where Dantes lived. He was a rival for the hand of Mercedes, and to get Dantes out of the way he helped set him up by sending a letter of accusation to the authorities, based on a brief visit he was asked to make to the island of Elba, where Napoleon was exiled. Fernand later joins the army and makes his fortune after he betrays the Pasha of Yanina and sells his wife and daughter into slavery. He buys the title of ‘Count de Morcerf’ and marries Mercedes. Their son is Albert de Morcerf.

Mercedes is romantically attached to Edmond Dantes at the beginning of the novel, but after Edward is sent to prison, she loses hope and marries Fernand Mondego, who later buys the title of Count de Morcerf. She is a loyal, if somewhat unhappy, wife, and a good mother to Albert de Morcerf. She sees through the disguise of Edmond Dantes early on, but never betrays him. She is a sad and broken woman by the end of the novel.

Albert meets Edmond Dantes, whom he knows as the Count of Monte Cristo, while in Italy. He becomes closely attached to the Count after he is kidnapped by bandits and rescued by the Count. He introduces the Count to French high society. When his father’s reputation is impugned in Parisian newspapers, he reveals himself to be a hot-headed young man, willing to kill or lose everything for the sake of honour.

Danglars works on the same ship, The Pahraon, as Dantes. He becomes professionally jealous when it looks like Dantes will be given the captaincy of the ship after the previous captain dies. He plots to put Dantes in prison. Later, he becomes a wealthy banker and marries Baroness Hermine de Nargonne née de Servieux, who becomes Mme Danglars. He is a loveless man who is more interested in money than anything else. This becomes the focus of the plot for revenge by the Count of Monte Cristo, who seeks to financially ruin Danglars.

Mme Danglars leads a fairly loveless marriage with her husband. She enjoys speculating on the stock market and sometimes loses money. The Count will use this fact to help him achieve his revenge against her husband. Another weakness is her extra-marital affairs. She long-ago had an affair with M.de Villefort, which resulted in the birth of Benedetto. Benedetto’s existence will also be useful for the Count’s revenge.

Eugenie is an independent spirit. Her desire is to live a life free to be an artist and to travel. She has no desire to marry a man, but she finds herself being paired with Albert de Morcerf. When Benedetto, pretending to be Prince Andrea Cavalcanti (backed with the Count’s money) comes to Paris, Eugenie’s father is overcome by greed, seeing a better marriage for his daughter, and ends her engagement with Albert. He sets up an engagement for her with ‘Andrea’, but Eugenie has other plans. It becomes apparent that she is having a relationship with her music teacher, Mlle Louise d’Armilly.

He is the part-owner of the boat, The Pharaon which Dantes takes in hand when its captain dies. His relationship with Edmond Dantes is good, and this will extend to his children, Julie and Maximilian, whom Dantes will later work to protect.

The son of Pierre Morrel, Maximilian is favoured by Edmond Dantes who looks out for his interests. Maximilian has begun to secretly liaise with Valentine, M.de Villefort’s daughter, who is meant to marry Franz d’Epinay, a friend of Albert de Morcerf. Maximilian will increasingly insert himself into the life of Valentine, and their romantic relationship becomes the basis of the happiest aspects of the novel’s denouement.

Friends and Allies of Edmond Dantes

Dantes befriends the Abbe Faria in prison. They create a secret passage between their cells, and Faria becomes Dantes’ teacher. He also tells him about a huge fortune hidden on the island of Monte Cristo. When Faria dies, Dantes swaps places with his corpse in order to escape the prison, and uses the forunte he finds to adopt a new identity and plan his revenge.

Vampa is a bandit whose hideout is on the outskirts of Rome. He becomes an ally of the Count of Monte Cristo when he attempts to kidnap the Count. The Count captures him, instead, but then lets him go. The Count has Vampa kidnap Albert de Morcerf so that he might be instrumental in Albert’s relief, thereby gaining his trust, and an introduction to French society.

Haidee is a slave, brought to France by the Count of Monte Cristo. Her father, the Pasha of Yanina, was betrayed by Fernand Mondego, who profited from the pasha’s downfall, and sold Haidee and her mother into slavery. She is fiercely loyal to the Count and very obedient. Their relationship is best described as father and daughter, although she becomes the Count’s lover late in the novel. She has been forbidden to speak of her father’s betrayal while in Paris, as this information will be part of the means by which the Count seeks revenge on Count de Morcerf.

Bertuccio had sought to kill M. de Villefort after he failed to help his brother’s widow, Assunta, in her financial troubles. Yet when he has the opportunity to kill Villefort, he realises that Villefort has just buried a box. He attacks Villefort, digs up the box thinking it’s treasure, only to find a baby – Benedetto – inside, the offspring of Villefort and Mme Danglars’ affair. Bertuccio raises the child with his sister-in-law. Bertuccio becomes the Count’s Stewart, and his knowledge of Villefort’s past will become part of the means by which the Count seeks revenge on Villefort.

Is Secretary to the Minister of the Interior. He is the friend of Albert de Morcerf as well as the lover of Mme Danglars. He provides her with financial advice which she passes on to her husband. Mme Danglars longs to make their relationship permanent, but Debray is ultimately indifferent to her.

Is the editor of the newspaper, l’Impartial, and a friend of Albert de Morcerf. A story about Albert’s father’s betrayal of the Pasha of Yanina is first published in Beauchamp’s paper, which threatens to ruin his reputation, as well as destroy the friendship between Beauchamp and Albert.

Caderousse is a tailor and a neighbour of Edmond Dantes to begin with. When Danglars and Fernand Mondego plot to frame Dantes, he becomes drunk and fails to stop them. Dantes initially has a good relationship with him. Dantes even gives Caderousse a diamond. But Caderousse and his wife sell the diamond to a jeweller and then kill the jeweller to keep both the money and diamond. Caderousse goes to prison, but later escapes. He plots with Benedetto to rob the Count, but is killed by Benedetto when the robbery goes wrong.

The Count of Monte Cristo - Characters