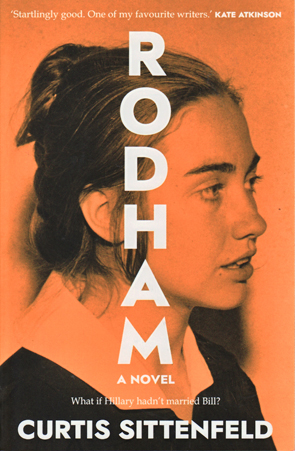 When Hillary Clinton’s supporters gathered in the Javits Center in Manhattan on election night 2016, the symbolism of the building was wasted. Clinton had long spoken of breaking the glass ceiling – a barrier symbolic of the limitations placed on women’s careers – to become America’s first female president. But America’s peculiar electoral system, designed to serve the needs of the early republic, placed Donald Trump in the White House and the rest is history.

The premise of Curtis Sittenfeld’s Rodham is simple enough: What if Hillary hadn’t married Bill? The novel implicitly assumes that Hillary Clinton’s run for the presidency was damaged by association with her famous husband and by opinions that had formed against her over her toleration of Bill Clinton’s very public infidelities; in short, that she was judged as much for being a woman and a wife as anything else. Without Bill Clinton, Hillary would not have the baggage that came with the Monica Lewinski scandal and the impeachment, along with the 60 Minutes interview in which she forcefully defended her husband; critical moments which hardened many Americans against her and which she was forced to again address in her debates with Donald Trump in 2016.

Hillary Clinton has become a divisive figure in American culture, and for those against her, her associations with Obama’s White House, along with the bungling over the email server that had Trump supporters chanting “Lock her up!” at his rallies are also important issues. Sittenfeld doesn’t address these aspects of the animus directed towards Hillary Clinton. Instead, she is interested in the personal life of Hillary Rodham and her complex feelings for Bill Clinton, while also encouraging us to consider how important are the decisions we make in life; how what becomes consequential may feel like fate.

Given that the novel is predicated on the idea of what might have happened, it isn’t really fair to prospective readers to discuss how things turn out in the novel. But it’s safe to assume that Hillary-haters are not going to read this book, so that’s a bit of a clue as to the expectations Curtis Sittenfeld has set herself to satisfy. Indeed, many readers invested in Hillary Clinton are going to feel satisfied with this book, while those sceptical but openminded about an alternate history based on the life of someone yet living might find enough surprises here both to amuse and give thought.

Yet for those interested in the wider sweep of history – of what is and what might have been – it is still possible to feel that this book falls short of its potential. its scope is mostly limited to the personal rather than the wider sweep of history. Some aspects of history remain unchanged: Barack Obama wins the presidency in 2008. But there are differences: Hillary Clinton beats Carol Mosley Braun in the run for a Senate seat in 1992, after deciding to run against Alan Dixon because of his support of Clarence Thomas’s appointment to the Supreme Court, thereby denying Braun her historic place as America’s first African-American woman to serve. Some aspects of this alternate history remain obscure. The 9/11 attacks still take place, but George W Bush isn’t president and it remains unclear whether the second Iraq War happens. Bush’s father, however, serves a second term after Bill Clinton’s wife breaks down in tears over his infidelities during their 60 Minutes interview. Without Hillary next to him to shore up his numbers, Bill’s support collapses in sympathy for his wife, and history is changed. So Sittenfeld’s question – What if Hillary hadn’t married Bill? – also has implication for Bill Clinton’s fortunes: that his success was also tied to Hillary who was not only supportive, but smart and strong.

And this is where we have to direct our focus. Instead of a political post-mortem – a liberal handwringing over Trump’s win and why Hillary Clinton lost – Sittenfeld, instead focusses on Hillary’s errant lover (and husband in our own reality). Bill Clinton is like Trump in some respects. He’s had affairs and is even accused of sexual assault (based on a real accusation from the 1970s). There are rumours of sex parties and after his defeat against Bush in the 1990s he turns to the tech industry and becomes a billionaire. Bill seems refined and intellectual when compared to Trump, but there is a clear implication: standards for men are different to women. Hillary remarks at one point: You know when equality will be achieved? When a woman with these kinds of skeletons in her closet has the nerve to run for office. Women, it seems, are under the microscope and judged by harsher moral criteria than men:

Sometimes I think I’ve made so few mistakes that the public can remember all of them, in contrast to certain male politicians whose multitude of gaffes and transgressions gets jumbled in the collective imagination, either negated by one another or forgotten in the onslaught. The less you screw up, the more clearly the public keeps track of each error.

Instead of sifting over the ashes of the 2016 election, Sittenfeld offers a portrait that humanises Hillary, revealing to us the difficulties of sexism, and of insecurities and loneliness. While she knows she is intellectually extraordinary, Hillary’s confidence is dogged by a feeling that she is unliked and plain in the eyes of men. So, Bill Clinton is a revelation: a man who is charismatic and handsome, smart and attracted to her both physically and intellectually. Hillary’s romance with him is a heady moment in her young life, and equally devastating when she discovers that Bill is a serial philanderer. It is believable, since we know Hillary Clinton did not leave her husband, that Hillary Rodham struggles with the decision to leave or stay. This is one of the strengths of the novel. That Sittenfeld takes this aspect of Hillary’s story, which has turned so many people against her, and draws out our sympathy. Hillary Clinton has been portrayed as unfeeling, almost sexless and cold, but Hillary Rodham is vulnerable, her desires are visceral, if somewhat confronting in some of the sex scenes in the first third of the novel. Sittenfeld creates a woman in love, with all the intellectual and physical excitement she feels through her relationship with Bill.

Another appeal of this novel is that real people seem to be true representations of themselves in this altered reality. Trump accuses Bill Clinton of wanting to run for president so he can have blow jobs in the Oval Office. Trump himself is a great character, even if his role is small. Whenever he speaks it’s not possible to read him without hearing his voice with a sense of the awkward horror he inspires. While he may play a different role in this alternate reality, he is totally believable, with all his ego and irrationality on display.

For those who are less-than-diehard-Hillary fans, some parts of this book might jar. Some of the sex scenes in the first third are somewhat graphic – one might even say the novel is something of a bodice ripper in a few scenes – which has a greater impact, I think, because we know Hillary as a public persona. Also, for those most interested in the book’s feminist credentials, some will be disappointed that the premise of the book falls short of its promise. It may allude to the ‘pink tax’ – the extra time female politicians spend for public appearances – to the poor treatment of female professionals and low expectations of women in general (Hillary is told at a dinner that she needn’t practice law long once she’s married: she will need to do ironing and shop), yet it is not Hillary who makes the decision to leave Bill. Did Sittenfeld feel Hillary could never have done it – her Hillary says as much – or was she hoping to reflect on the complicated circumstances that keep women, even public women, in difficult relationships, while putting aside the vilification Hillary Clinton has endured? It is entirely possible to read it either way, but also possible to be less generous for those inclined to be so.

Rodham begins with Hillary’s graduation speech at Wellesley College in 1969, in which she called Senator Brooke to account over remarks he made in his opening speech at the graduation. Hillary Rodham was the first student to ever speak at a graduation ceremony at the college, and her remarks made it to the national press. In Sittenfeld’s retelling of the moment, Hillary reflects on how she looks to other people present: The feeling was in the collapse, the simultaneity, of how I seemed to others and who I really was. Sittenfeld chooses a revealing phrase for Hillary to express how she feels: my competence, my loneliness. Throughout, Rodham, there is always the sense as we look under the skin, not only of the vulnerability of Hillary Rodham, but her aloneness. After Bill Clinton she seeks solace in other relationships, but none have the excitement or intellectual satisfaction provided by Bill Clinton. At the same time, her public life both thrives on this aloneness and also suffers the negative public perception of her as a single woman without children. Whatever weaknesses this book does possess, it is interesting that it captures this paradox. Hillary Rodham was the first student to deliver a graduation speech at her college in 1969, at the request of her student body. The speech made national headlines for her criticism of Senator Edward Brooke and demonstrated her eloquence and ability to think on her feet as she responded extempore. Many comments for the YouTube video of the recorded speech (below) focus on Hillary being a hottie and pretty. 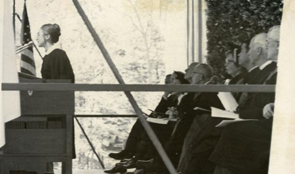