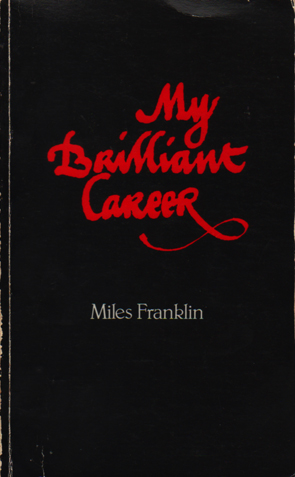 Background to this short review

I wrote the review that follows in 1990 as part of an Australian History course. It was for a short assignment which required students to read an Australian classic and make some comments about its historical context. The focus of the review was guided by the requirements of the assignment. Thirty years later I found the review in a filing cabinet I was cleaning out and decided to make it available on this website. The original review used references and referred to page numbers, but I’ve removed them for this web version.

Background to the Book

My Brilliant Career was first published in 1901 after Miles Franklin submitted her manuscript to Henry Lawson, a well-known Australian writer who frequently contributed to The Bulletin. The book had been written as a romance to entertain her friends.

In 1979, producer Margaret Fink and director Gillian Armstrong adapted the book for the screen. The movie became an instant Australian classic and contributed to the feminist discussion about the independence of women.

In the novel Sybylla Melville is sent to live with her grandmother after her family’s fortune is lost. She meets a man, Harold Beecham, who proposed marriage. Sybylla rejects him, believing herself ugly, and cannot believe Beecham truly loves her. Sybylla’s thoughts turn to a career in which she becomes a writer. The historical context of the novel is the economic depression of the 1890s and the changes in the class structure which had long been predicated upon the attitudes to the city and bush, as well as the division of social class between selectors and squatters.

Squatters were a class of pastoralists who originally occupied crown land and used it to run their stock. At first this was illegal, but over time Squatters gained legal status and many became wealthy. Despite the negative associations with squatting these days, Squatters in nineteenth century Australia came to be seen as the landed gentry.

Selectors were land owners granted land by the government through land acts. These acts were written after many squatters had claimed large tracts of land. Land allotted to Selectors was usually smaller than those runs held by the Squatters, and they were usually poorer.

Henry Lawson was an Australian writer who wrote for the national magazine, The Bulletin. His short stories have become classics of Australian literature.

Banjo Patterson, a contemporary of Lawson, is best known for his poetry about the Australian bush. His poem, ‘The Man from Snowy River’, was the inspiration for a feature film.

Literature and film are products of their times. Margaret Fink’s film, My Brilliant Career is a product of a decade of intensified feminist thought throughout the 1970s. However, Miles Franklin’s novel, which is the basis of the film, does not consciously pre-empt a feminist discourse.

Franklin’s character, Sybylla Melville, might reflect bitterly about the powerlessness of women in her society at the close of the novel (I am only a – woman!) but her real concerns are tied inextricably to class consciousness. My Brilliant Career is informed by Australian attitudes of the time, advocated by writers like Henry Lawson of The Bulletin: attitudes that valued the city and the bush, free selectors and squatters, differently.

This ‘class consciousness’ is represented in the places Sybylla is forced to live: Possum Gully, Caddagat and Barney’s Gap. Also in the way she classifies different people: her mother was a full-fledged aristocrat. She speaks of the Bossiers and Beechams as the squatocracy, thereby aligning them with the notion of an Australian aristocracy. She tells Mr. M’Swat, You must not think that because you have grasped and slaved and got a little money that it makes a gentleman of you. And on her forced return to Possum Gully she describes it as nothing but peasant surroundings and peasant tasks, and … peasant ignorance …

Much is made of Sybylla’s rejection of the marriage institution in Margaret Fink’s 1979 film adaptation as part of a feminist discourse. However, in Franklin’s novel Sybylla’s rejection of matrimony is more a product of her personal peccadilloes. She worries about her looks which makes her think she is not good enough for Harold Beecham. She feels a need to be needed. Harold’s fall from financial fortune provides this opportunity; an opportunity to assist a man through life. However, Harold’s return to fortune also brings the return of her old concerns. Sybylla’s rejection of Harold is a result of her own personal feelings of inadequacy (her belief that she is ugly), as much as a rejection of his social class. His money makes him independent of her.

The novel also offers a wider vision of Australian society at the time of its writing. Sybylla’s ‘class consciousness’ is revealing of attitudes shaped by the depression of the 1890s. Her time at Caddagat, a representation of the Australian ‘aristocratic’ estate, is juxtaposed with the continual stream of landless, unemployed beggars on their heart-sickening, futile quest for work.

The novel reveals an antipathy between the two classes at this time. Sybylla, with naïve Marxist insight states: … had the squatters not monopolised the land, the swagmen would have plenty. She sees lack of property as part of the problem facing these swagmen, although fails to see Harold Beecham’s fall from grace as a part of the same social phenomena. Jay-Jay, a rich squatter himself, fails to find any sympathy for the swagmen and says they are scared of work. Frank Hawden refers to them as a lazy lot of sneaking creatures.

Sybylla’s own reactions against the marriage institution must be read in the light of this antipathy. One detects feelings of guilt throughout the novel as a reaction to Sybylla’s leisured life at Caddagat: We did not worry about thousands of our fellows – starving and reeking with disease in city slums. We were selfish. We were heedless. Her experiences at Possum Gully and Barney’s Gap force her to experience this social dichotomy: the M’Swat’s who have money but are not cultured, and her own family, former ‘aristocrats’ forced to live like peasants. Her acceptance of her return to Possum Gully is an acceptance of responsibility; a responsibility to be no better than her fellow Australians.

Franklin’s Sybylla may push a quasi-feminist barrow at times, but her character does not pre-empt the feminist movement in Australia. Instead, her character was appropriated by it. Sybylla’s feminist notions are at times no more than an excuse. She rationalises Harold from her life because she cannot help him. He is a man and it is a man’s world.

But Franklin’s Sybylla is very much a part of that male world. The ‘culture’ she so often alludes to (and reveres as her God) is a male culture. It is the writing of Patterson and Lawson. Lawson even writes the preface for the book, informing the reader in patriarchal tones that the novel is written by a girl. It’s hard to imagine a modern feminist writer seeking to further her credibility with the approval of a male establishment figure.

All this is not to criticise Franklin’s achievement. At the time there was no alternative means of publication, and the concerns of the 1890s centred around economic depression rather than feminism. Yet in reading My Brilliant Career it becomes clear that while a feminist appraisal of the book, its themes, its historical context and its reception are valid, the evidence from the book itself suggests Miles Franklin was not a feminist writer in the modern understanding of the idea. The novel’s concerns are more accurately described in terms of economic depression, unemployment, the predominance of rich squatters in the country, the squalid conditions of poorer land labourers, and a sense of female identity still maturing within male paradigms.