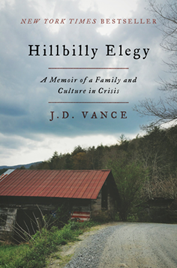 A Memoir of A Family And Culture In Crisis

This was a fascinating but at time extremely sad book to read. The front cover of my edition claims that this book is A great insight into Trump and Brexit. It's a big claim, and I think an exaggeration. But it certainly explains the feelings of anger and isolation that some communities feel.

This is a personal memoir, not a political study, although it does discuss the effect of some government policies, as seen by J. D., have had in the area where he grew up. He makes a point that his grandfather (Papaw) was a staunch Democrat. The Democrats were the party that protected the working people, the Republican Party was for the wealthy. The only time Papaw ever voted Republican was for Reagan. And only then because the Democrat candidate was a well-educated, Northern liberal who stood in stark cultural contrast to hillbilly Papaw. I never liked Reagan much, Papaw later told me. But I hated that son of a bitch Mondale. But later in the book we learn that the area as a whole has turned from staunchly Democrat to staunchly Republican inside a generation.

Although Vance firmly describes his family as hillybilly, with deep roots in Kentucky, much of what he describes of the town he grew up in the Rust Belt of Ohio could equally well describe any working class area where jobs were mostly in a single industry, after that industry has either closed down or substantially reduced their workforce. Some of his descriptions reminded me of early scenes in The Full Monty, for example in the job-search workshops where most of the attendees knew there was no hope for them in searching for a new job. That feeling of knowing that the only thing you could do was manual labour in an industry that no longer had need of you and that there was no use even attempting to look for another similar job. The only reason to turn up at all was so that you could continue to collect the dole. J.D. seems to feel that many of the problems in his hometown have, have their roots in the hillbilly culture that his grandparents (Mamaw and Papaw) and many like them brought with them when they moved north in search of employment and a better life. But I think you could study similar industrial towns which did not have the large hillbilly population and find similar problems caused by high unemployment and drug use.

J.D. talks of a learned hopelessness, the resignation of many people that nothing will ever get any better in their lives, that nothing you can do will ever change anything. And then passing this feeling down to their children. J.D. witnessed this amongst most of the people, he grew up and went to school with. He counts himself very lucky that he was able to leave the town and become successful. Most of this success is attributed to his Mamaw and Papaw, although from his descriptions of his family history, it is obvious that Mamaw and Papaw also had problems and could be said to have contributed to many of J.D.'s problems as a child.

Mamaw & Papaw left Kentucky as teenage newly weds with a baby on the way, and settled in Middletown, Ohio. Papaw got a job at the local steelworks. The steelworks was one of the major employers in the town, and they recruited large numbers of hillbillies post World War 2. Papaw had a good, stable job, they bought a large house, a car, and seemed settled in a middle class life. They had expectations that their children would be better educated than they were, would go to College and be part of the American Dream with improved lives. But although they had financial security, they were also isolated from their family support network, initially felt unwelcome in Middletown, and like traitors whenever they (frequently) returned to visit their hometown.

Papaw became a violent drunk and Mamaw a violent non-drinker. Eventually they separated, sorted out their lives, and became a stable force in their family. But when J.D.'s mother and her brother and sister were young, they constantly witnessed violent fights, including the graphically described time Mamaw tried to kill Papaw:

Mamaw told Papaw after a particularly violent night of drinking that if he ever came home drunk again, she'd kill him. A week later, he came home drunk again and fell asleep on the couch. Mamaw, never one to tell a lie, calmly retrieved a gasoline canister from the garage, poured it all over her husband, lit a match and dropped it on his chest. When Papaw burst into flames, their eleven-year-old daughter jumped into action to put out the fire and save his life.

None of the three children went to College - his uncle got a job at the steelworks, his aunt escaped from home to an abusive early marriage at 16 and his mother got pregnant at 18. Eventually his uncle and aunt sorted out their lives (his uncle got a white-collar job and moved to California, his aunt divorced her abusive husband, got a job, met a nice man and ended up in a happy, stable marriage).

His mother in contrast became a drug addict who went from one unhappy relationship to another, alternated with stints in rehab., and with clear mental health problems. J.D. and his sister were forced to move frequently, sometimes well distant from their grandparents (the only stability in their lives) and often had to fend for themselves when their mother out cold or back in rehab. At one point, he says, For seven long years, I just wanted it to stop. I didn't care so much about the fighting, the screaming, or even the drugs. I just wanted a home, and I wanted to stay there, and I wanted these goddamned strangers to stay the fuck out.

J.D. acknowledges that he was a lucky son of a bitch in escaping from the abyss his life threatened to become. In his case his escape came when he moved permanently into Mamaw's house when he was in tenth grade, after he flees his violent mother.

Back to the question as to whether this book explains the success of Trump. The book does show a feeling that many of the people in J.D.'s town have a feeling of being victims, and that other people are the blame for their problems: the learned hopelessness. This I think is a feeling that Trump was able to tap into - that feeling that the elite, the government, the candidates who are in the pocket of big corporations are the reason for all of their problems, not their own actions. So, while I don't think this book can explain the rise of Trump, I think it does offer an insight into the world of the poverty and helplessness felt by a large group of people. It doesn't really offer any solutions, but understanding this world is necessary before any solutions can be found.

There is a cultural movement in the white working class to blame problems on society or the government, and that movement gains adherents by the day.

Here is where the rhetoric of modern conservatives (and I say this as one of them) fails to meet the real challenges of their biggest constituents. Instead of encouraging engagement, conservatives increasingly forment the kind of detachment that has sapped the ambition of so many of my peers. I have watched some friends blossom into successful adults and others fall victim to the worst of Middletown's temptations - premature parenthood, drugs, incarceration. What separates the successful from the unsuccessful are the expectations that they had for their own lives. Yet the message of the right is increasingly: It's not your fault that you are a loser, it's the government's fault.