In Federalist No.55 Madison raised four criticisms against the makeup of the House of Representatives which he intended to address:

This paper addresses the fourth of those criticisms.

Madison devotes much of the remainder of this paper to this last point. He reasons that the House of Representatives, will give an advantage to states with larger populations, while states with small populations will gain a disproportionate representation in the Senate. Given that either branch of Congress can block legislation, a group of smaller states might form an alliance within the Senate, while larger states would have the advantage in the House. Larger states will, according to their own self-interest, wish to increase their representation in the House when a census shows significant increases in population. He argues that middling states whose populations are significant enough to also benefit from increased representation will also have an interest. New states whose populations are likely to grow quickly will also have an interest in ensuring that representation increases.

This optimism is set against the possibility that smaller states might pursue an unjust policy in which they seek to limit the increases in representation via the Senate. Madison argues that the power of the House to propose supply – that is, they hold the purse, should provide an adequate weapon for the representatives of the people.

However, Madison has to balance this thought with the assurance that this weapon would not be used irresponsibly:

Those who represent the dignity of their country in the eyes of other nations, will be particularly sensible to every prospect of public danger, or of dishonourable stagnation in public affairs … The utmost degree of firmness that can be displayed by the federal Senate or President, will not be more than equal to resistance in which they will be supported by constitutional and patriotic principles.

Of course, the Democrats did block supply over President Trump’s plan to build a wall along the Mexican border at the beginning of this year. It was the longest shutdown of government in American history. In Australia, Malcom Fraser’s opposition party blocked supply in 1975 to try to force the prime minister to an election. Whitlam refused and the deadlock was broken by the Governor General, John Kerr, who sacked the Prime Minister. These are just two examples that show supply is indeed a weapon when an opposition that controls the Senate feels there is an existential threat to the country. However, the scenario that Madison imagines is unlikely to occur, given that it would unlikely be perceived as an existential threat. 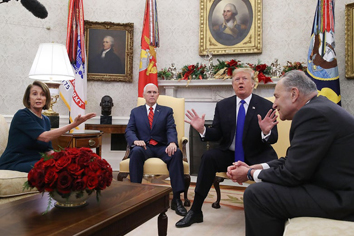 Speaker of the House Nancy Pelosi, Vice-President Pence, President Trump and Senator Schumer at the meeting in which Trump came into open conflict in front of news cameras with the House over the supply of funds for the border wall with Mexico. 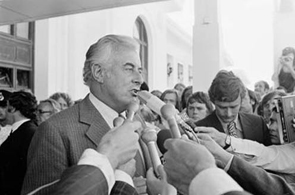 Gough Whitlam on the steps of Parliament House, Australia, after his sacking by Governor General John Kerr. Blocking of supply by Malcom Fraser’s opposition party in the Senate led to Whitlam’s downfall.

Madison ends his paper by turning the discussion concerning representation about, by warning of the dangers of increasing the numbers in the House by too many. He argues that experience shows that when there is too large a representation, several negatives follow. First, issues are treated emotionally rather than through reason. Second, a proportion of the members will necessarily be ill-informed and of lesser talents. As in the ancient democracies, he argues, there will always emerge leaders, but the danger lies in the power they wield: Ignorance will be the dupe of cunning, and passion the slave of sophistry and declamation. In fact, Madison argues that past a certain point, adding more representatives to the House will be counterproductive:

Experience will forever admonish them that, on the contrary, after securing a sufficient number for the purposes of safety, of local information, and of diffusive sympathy with the whole society, they will counteract their own views by every addition to their representatives. The countenance of the government may become more democratic, but the soul that animates it will be more oligarchic.

In addition, the larger the representation, the question as to the appropriate quorums for the passing of legislation arises. Madison argues that a situation would exist in which the government would potentially become less democratic, as the business of government was represented by smaller subset groups from the House that satisfy quorum demands, but are too weighted towards particular interests.