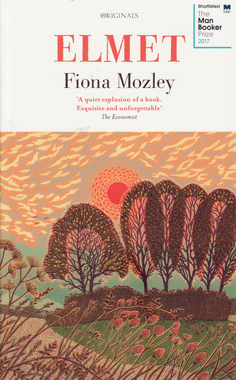 Elmet tells the story of John Smythe, known to his children, Cathy and Daniel Oliver, as ‘Daddy’. They live at the edge of the English woods during the late twentieth century. Daniel recounts how they chose the site of their home, how they lived under cover as they built it from the materials gathered around them, and then made their life in the woods. Interspersed with this narrative is the present-day account of Daniel heading north to look for his sister. The juxtapositioning of the two narratives raises a question: what has brought the family to this point?

The account of their lives in their house reminded me a little of Thoreau’s Walden: the setting seems idyllic, offering the scope for an introspective bildungsroman. There’s something of To Kill a Mockingbird here, too. Cathy and Daniel are a little like Scout and Jem in that they idealise their father, a man respected by the local community and not willing to bend to the will of others. But Daddy is a very different man than Atticus Finch. He is a giant of a man, physically imposing. He’s made money from fighting other men, but his muscle has also been used by the likes of Mr Price to intimidate others or call in debts. Daddy is unbeaten and his reputation is far-ranging. Price, on the other hand, is manipulative, controlling and dangerous. He’s bought up all the land in the area, preying upon the financial hardships of his neighbours, and he demands rent in money or kind. Many of Daddy’s neighbours work for Price or other men like him for minimal wages. They can’t afford to complain since their own welfare fraud is a fact Price and men like him may one day choose to reveal to authorities as newly discovered. This is the conflict at the centre of the narrative. The location seems idyllic, but it is a story of people living on the margins, exploited and at the mercy of their ruthless landlords. And a man like Daddy, who sets up house on that land, albeit land not being utilised by its legal owner, will eventually encounter conflict. When Daddy is presented with a legal deed for land he says it Means nothing to me:

I can read well enough to understand what it says. It’s idea a person can write summat on a bit of paper about a piece of land that lives and breathes, and changes and quakes and floods and dries, and that person can use it as he will, or not at all, and that he can keep others off it, all because of a piece of paper. That’s part which means nowt to me.” (202)

Daddy’s attitude to legal ownership is not surprising. He is essentially a modern Robin Hood, having squatted illegally on another man’s land. Daddy is not engaged intellectually with the world, but physically, and it is his physical work, looking after the copse and living from the land, that legitimates his claim upon it. His mindset predates modern enclosures, even though he lives in our modern world. His world is pre-modern, represented by allusions to the green men of legend and Robin Hode, a reference to the famous outlaw which anticipates Daddy’s role in championing the cause of his neighbours against the landlords. In this way, Elmet positions itself as a quintessentially English story, reminiscent of the anglo-saxon struggle against the French overlords who took England by force. William the Conqueror imposed control over the English peasant through the Domesday Book, a book recording all that was owned and by whom. Legal ownership of land is at the heart of much of the story of the English peasant, from the Domesday Book to the Enclosure Acts.

It’s an issue highlighted by the novel’s epigraph, which quotes Ted Hughes’ Remains of Elmet. Elmet, we are told, is the name of the old independent Celtic kingdom that stretched out over the vale of York. This is the old England that informs the lives of Daddy and his followers and exists as an imaginative backdrop to the novel.

The novel progresses from the idyll of the opening pages, which at times resembles a kind of nature writing, to the second half which is more plot driven. Seen through the eyes of Daniel, we are given impressions not only of the growing conflict as he perceives it, but his own nascent sexuality, secretly spying on his tutor, Vivien, as she dresses, as well as growing increasingly aware of his own femininity, leading to a homosexual encounter in the present-day narrative. Daniel’s growing sexual sense is at odds with his overly masculine father, although like Atticus Finch, Daddy is open minded and never imposes an identity upon his children.

The front cover of my copy quotes a reviewer from The Economist, who describes Elmet as a quiet explosion of a book. I find that review quotes on books covers are rarely helpful. They’re usually hyperbolic and taken out of context. But this seems like a good description of Elmet, to me. The book begins slowly. It is atmospheric and beautifully written. One gets a sense of the quiet bucolic beauty of the land and one empathises with Daddy’s alternative understanding of ownership and connection to the land. As I have said, Mozley achieves this through playing to long established English traditions. But the second half of the book reads more like a thriller. The tension mounts and the violence is shocking, even surprising, although you anticipate something.

I felt that this was a very accomplished piece of writing. I enjoyed the book throughout, although I admit that the ending left me with a sense that there was something missing from the story. An author is not required to wrap things up nicely, but I was left wondering about Daniel’s state of mind and his motivating force that has been the basis of his story. That’s what it was for me: not an open ending, but a sense that there was something that, by the final page, left me wondering about the character and his motives.

Nevertheless, this is a book worth a read. It’s been shortlisted for the Booker Prize. I can’t say whether I think it should win, since I’ve only had time to read one other book from the list so far, but I would place it above Mohsin Hamid’s Exit West.