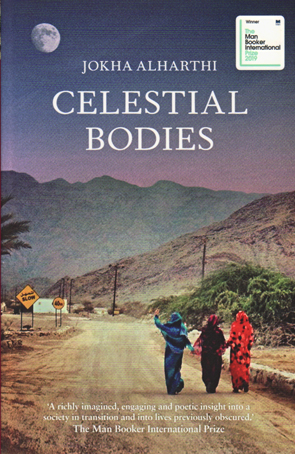 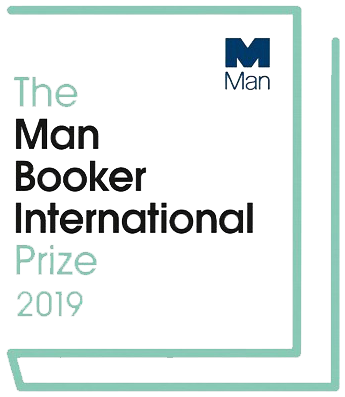 Celestial Bodies is one of the finest books I have read this year. It is also the first book nominated for the International Booker prize from an Omani author. Set in al-Wafi, a village in Oman on the edge of the desert, the story concerns several generations of a family whose various members have been touched by the slave trade as well as those who struggle in one way or another with their relationships. Oman only abolished slavery in 1970, so there is a divide between the family generations, of those who not only remember slavery, but who were slaves (who even still live with their former slave owners) and those who wish to find a more independent path for themselves and their children.

This is a broad description, for the truth is, Celestial Bodies is more to be experienced than described. It has a complex narrative structure and numerous characters receive focus in one way or another throughout. In addition to this, the story is non-linear, moving between the past and present of these multiple characters, so that details emerge slowly, told both in the voice of an omniscient narrator, as well as a first-person narrator, Abdallah, whose story emerges as one of the most significant in the novel.

That, in itself, is an interesting aspect of this book, since many might judge it to be primarily about the lives of women, which it is. There is a family tree showing the various relationships at the beginning of the book, and each of the marriages features the name of the wife first. And the story is mostly focussed on a few key women. There are the three sisters: Mayya, who marries Abdallah despite her secret passion for another man; Asma, a bookish girl who agrees to marry Khalid in the traditional way of arranged marriages; and theen there is Khawla who refuses to marry anyone but her childhood sweetheart, Nasir, who has left to study in Canada without any contact for several years. Finally, Zarifa rounds out the key female characters. Born into slavery and forced to marry Habib as a punishment for arguing with Merchant Suleyman, her master, she cannot understand Habib’s desire for freedom once slavery is abolished, nor does she approve of modern innovations, like Mayya’s decision to name her daughter London. Mayya is part of the new generation, an anglophile at heart with progressive views, despite accepting her marriage to Abdallah, and her daughter will benefit from this, as she eventually studies medicine. But the new opportunities for women do not insulate London from the difficulties suffered in relationships by other women in this book. Betrothed to Ahmed, London eventually buys out of her deteriorating relationship with him when he beats her.

Abdallah’s personal narrative gives the book balance. He is one of two key male roles, the other being Azzan, his father-in-law. Abdallah’s marriage is plagued by his wife’s secret desire for another man, who remains at a distance, never entering her social circle or the story narrative beyond the first chapter. In fact, Mayya bears all the hallmarks of a courtly lover. Ali bin Khallaf remains an ideal for her, who returns from London (a fairly obvious clue to the naming of her daughter) empty-handed from years of study. Ali bin Khallaf is a tabula rasa, unknown to Mayya and therefore a blank slate onto which she can scribe her secret desire in her colloquy with God. Abdullah, her husband, however, suffers doubly in a loveless marriage and from the torment of his growing up at the hands of his merciless father, Merchant Suleyman, as well as the mysterious death of his mother early in his life, leaving him to be raised by the family’s former slave, Zarifa.

In contrast to Abdallah’s marriage is Azzan’s, who is seduced by a Bedouin woman, Najiya, who calls herself Qumar, the Moon. Azzan’s marriage falters and his reputation is sullied by furious gossip.

The compelling thing about this novel is the twin divides of the characters’ lives: between the traditional conception of marriage and relationships, and their realities, as well as the tension between old and new thinking; between a colonial past and post-colonial future.

The issue of colonialism is more oblique in the novel. Zarifa is the most potent reminder of the colonial past. Her grandfather, Senghor, was abducted from his village by pirates even as Zarifa’s future owner was negotiating an end to the slave trade with the British. The same owner, Shaykh Said, imprisons Zarifa’s mother, Ankabuta, for refusing to sleep with Nasib, the man Said has forced her to marry. Ankabuta is raped in prison by Nasib and Zarifa is conceived.

There is a gradation in the novel from this most extreme case, followed by Ankabuta’s daughter Zarifa who is forced to marry as punishment, to the next general of women – Mayya who accepts an arranged marriage despite a secret love, to Khawla who refuses to marry anyone but her sweetheart, and then eventually London who decides, herself, to leave her relationship with Ahmed. To that extent, the story is not only one of the emergence of Omani culture from a colonial relationship, but of the gradual shift in the situation of women in the culture.

This shift has its concurrent treatment in the attitudes to love throughout the story. Mayya’s position at its beginning – one akin to courtly love – is a belief in love as an essence of one’s existence: the beloved is not only admired, but is essential to one’s understanding of self. On the other hand, Azzan’s asserts: Others are always other. This is in stark contrast to Asma’s position. From her reading she has developed a romantic notion of the soul:

God, mighty is He, created every soul in the shape of a ball. And then He split every one of these spheres into two, and apportioned to each and every human body one half. It is decreed that each body will meet the body that holds the other half of that rent soul. Between the two a passion arises from that ancient bond.

It is not difficult to predict that Asma’s romantic notions will be challenged by her neglectful husband, or that this key tenet will be challenged by other beliefs throughout. The conception of the soul as a ball, itself, prefigures the concept of celestial bodies – of the Moon, Saturn or Mercury – not only guiding lives as astrologers might assert, but as a metaphor for relationships. Judge Yusuf, a traditionalist who advocates the denial of the physical body to achieve mystical union with God, writes of celestial bodies in language that is reminiscent of astrological predictions, as he discusses the influence of heavenly bodies and their power upon our world. But Judge Yusuf conceives of the Moon as the nexus between the filth of creation and what is on high, reflecting the light of other heavenly bodies upon earth, like a visual representation of the link between the profane and divine.

This contrasts with Najiya who calls herself Quman, the Moon, whose influence derails Azzan from his traditional role as a husband. This is a satisfying aspect of this book, as it explores the tension between older world views like Judge Yusuf’s, and their modern counterparts. In the case of celestial bodies, the metaphor changes when tested against the conditions of modern expectations in marriage. For Asma, she comes to realise that Khalid is not the other half of her soul, but a celestial body – like a planet – with whom she has come in contact, with all the attendant implications that astronomy and physics bring to bear upon the metaphor. If Khalid is a planet, then he cannot be one half of a soul-sphere. And like a planet, physics dictates that his gravitational power warps Asma’s life, caught up in his orbit, and therefore endangering her awakening sense of self, rather than completing it. In the most modern expression of these emerging thoughts – of love and what part marriage plays – Hanan, London’s flatmate, says:

As far as I’m concerned, what marriage is doesn’t have a lot to do with love. Love is dreams, marriage is for real: life, responsibility, children. No illusions. The right person is the one who respects and honours you, and you feel totally comfortable with, the one who will be a father you can be proud of, for your children’s sake.

Celestial Bodies is a complex narrative with too many characters and situations to be discussed in a review. I found the book compelling, with an even treatment of its subject matter, since Alharthi does not merely divide men and women in telling the story of modern Oman, but explores complexities and difficulties. There are also shocking and tragic moments in this novel which speak profoundly of the tensions between the old and the new, or the private and public self, which must be experienced by reading the book. Celestial Bodies explores not just the personal stories of its characters, but evokes a sense of a society emerging from a colonial past and struggling to redefine its values. Highly recommended. 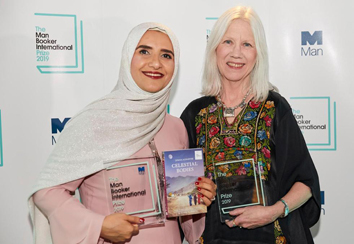 Jokha Alharthi and her translator, Marilyn Booth, accept the award for the Man Booker Prize, 2019

Mayya, forever immersed in her Singer sewing machine, seemed lost to the outside world. Then Mayya lost herself to love: a silent passion, but it sent tremours surging through her slight form, night after night, cresting in waves of tears and sighs. These were moments when she truly believed she would not survive the awful force of her longing to see him.

Her body prostrate, ready for the dawn prayers, she made a whispered oath. By the greatness of God - I awant nothing, O Lord, just to see him. I solemnly promise you, Lord, I don't even want him to look my way ... I just want to see him. That's all I want.