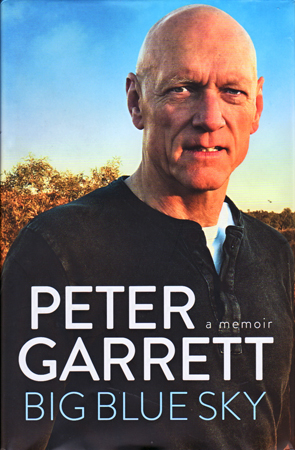 Big Blue Sky is an autobiography by Peter Garrett, a man who many people would only know as the lead singer of the Australian band, Midnight Oil.

However, for many, Australians in particular, there is much more to his background, which this book reveals. As a baby boomer, Midnight Oil was one of the bands I loved growing up and was one of my inspirations. But Garrett’s impact on Australian culture went beyond that, with his dedication to all things related to justice and the environment, and through his no-nonsense approach in Australian politics.

As I read his autobiography, I realised that even what I knew of Peter Garrett was only a small snippet of this amazing man. Born only five years before me in 1953, in the northern suburbs of Sydney, he led a modest life, growing up with the expression ‘waste not, want not’. It is possibly one of the reasons why he went on to take the environmental stance he did as he became older. As I grew older, Garrett remained of interest to me. Many of his experiences, such as playing cricket in the street, playing on homemade billy carts and climbing trees, mirrored my childhood, and his political stance was usually fairly close to my own.

Garrett spent all of his school time at Barker College, a place he never really seemed to warm to, due to its regimentation and its sporting and academic bias, often feeling that his love of music outside school was the only thing that he enjoyed in these years.

At only fifteen though, he experienced his first trip to Papua New Guinea, and this was the start of his understanding of indigenous issues, arriving at the centre of land claims by the Tolai people. It became something near to Garrett’s heart and always part of his philosophy and his music. It also moulded his political views.

He studied law at university, where he became heavily involved in supporting environmental issues in particular. But his music continued to be important and it even in the early days it related these concerns.

In the mid-70s, bands like Sherbet, who I remember doing a lunch time concert at our high school, were big on the Australian music scene, but Garrett recalls how dismissive they were of him and his band, not even allowing his band to play on the same stage, whereas Skyhooks were nothing but encouraging of their performance. They did it tough, taking any gigs they could and travelling long distances to earn money.

Garrett continued with his band, now known as Midnight Oil, to try and get gigs and air play on shows like Countdown, an Australian music show. They developed a reputation as independent voices in the rock scene and a reputation for their live performances: The Oils didn't wear their sources on their sleeves because they each had different tastes and no slavish devotion to one band or era of music. It is interesting for Sydneysiders to compare the music scene that Garrett describes from this era, compared to now, since Sydney instituted lockout laws several years ago to curb alcohol-fuelled violence. The laws had a negative impact on live music and clubs in Sydney, and there has only recently been attempts to reverse the impacts the laws were not designed to have. Later, Midnight Oil ventured overseas. They found it difficult to break into the US scene in particular, receiving negative press for perceptions that they were 'anti-American’, with songs like ‘US Forces’, a song critical of America’s foreign policies.

The book is largely chronological and provides chapters on the various issues Garrett and his band supported over the years, including drought, bushfire and climate change, and many other issues of importance across the world at present, but especially in Australia right now. It's interesting that Garrett spoke widely of his concerns about climate back in 2007: climate change is a pressing topic around the world but here in Australia there is a reluctance to address it by our conservative government, as in other countries, so unfortunately, not a great deal has changed in politics to support these views and plan for the future.

Apart from this, Garrett’s stand on domestic violence, peace, youth homelessness, privacy, anti-whaling, saving wilderness areas like the Franklin River in Tasmania, uranium and nuclear issues, and his involvement with the World Conservation Foundation, have been woven into his music. The Oils were never afraid to support such issues with fundraising concerts, or indeed, upset the Olympic committee (not to mention the Howard Government of the time) with their 'Sorry' outfits at the closing ceremony of the Sydney 2000 Olympics.

Always critical in his early days of The Australian Labor Party for its stance on Nuclear issues, Garrett actually went into Labor politics and yet still often butted heads with other politicians because of his views. One such case was with Bob Hawke, the then Australian Prime Minister, over privacy and the National Identity Card, which raised fears of its Orwellian potential in the Australian population.

Garrett continued to pursue his career in Federal politics, but by the early 2000's it was extremely turbulent times. Issues such as the National identity Card had been a bone of contention, the world was heading into a recession and Australia was grappling with how to best ride it out. The Rudd Government put in place a stimulus package in 2008 to promote growth and spending. This largely stopped the country from spiralling downwards, as many countries did during the GFC, but Garrett would soon realise that things which mattered deeply to him and promises made, were not as important to other politicians and he resigned from politics in 2013.

His biography goes deeply into the politics behind the man and his band, something I have only touched on here. It is an interesting read, especially in these times of continuing protests regarding environmental issues and unrest about our government’s leadership. The book includes three sections of colour plates that span his rock career and his time as a government minister, as well as an index. 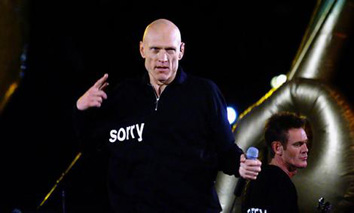 Peter Garrett and Midnight Oil
Garrett and Midnight Oil had become Australian rock icons long before Garrett became a government MP. The 2000 Sydney Olympics were held during his party’s time in opposition. Garrett finished his afternoon in Parliament House on the day of the closing ceremony, and then performed with his band that night at the closing ceremony. They appeared on stage wearing outfits emblazoned in several places with the word Sorry. It was done without permission. Australian’s understood the political implications. It was a reference to the long-running debate about whether Australian Aboriginals should receive an official apology from the Australian parliament for their dispossession of land and the previous policy of removing Aboriginal children from their parents. The then Prime Minister, John Howard, refused to give the apology. His successor, Kevin Rudd, gave an apology within the first hundred days of his government. Garrett was an MP in that government. 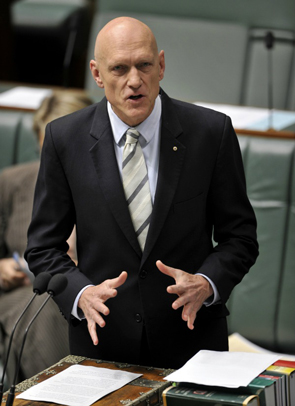