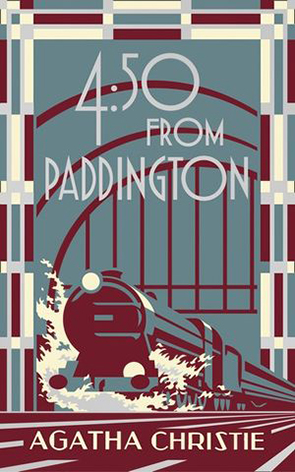 Mrs McGillicuddy has travelled on the 4:50 train from Paddington, on her way to a short visit with her friend, Miss Jane Marple. Her journey is disrupted by a shocking sight: just before the train reaches Brackhampton, another train draws alongside it and Mrs McGillicuddy sees in a carriage opposite her on the other train a woman being strangled, before then the two trains move apart.

“Standing with his back to her was a man. His hands were round the throat of a woman who faced him, and he was slowly, remorselessly, strangling her. Her eyes were starting from their sockets, her face was purple and congested. As Mrs McGillicuddy watched fascinated, the end came; the body went limp and crumpled in the man’s hand. At the same moment, Mrs McGillicuddy’s train slowed down again and the other train began to gather speed . . . a moment or two later it vanished from sight.”

She reports this to the conductor of her train and to the police, but when no body is found, she isn’t believed. Miss Marple, however, knows her friend to be unimaginative and believes her story. She realises the body must have been pushed from the train above an embankment for later removal by the murderer, and she cleverly figures out where this logically must be. There is a large estate, Rutherford Hall near where the body had to have left the train, and Miss Marple persuades an acquaintance, Lucy Eyelesbarrow, to take a position in this household to snoop around for her. It takes Lucy a few days, but she eventually finds the body, stashed in a stone sarcophagus in an old barn/storage area on the estate. The police are called in, but the crime is really solved by Miss Marple, ably assisted by Lucy, who does all the groundwork.

Most of Christie’s stories start very slow, building up to a murder much later in the book, after we’ve met most of the characters already. But 4:50 From Paddington plunges us straight into the action, before we have any opportunity to know anyone at all. However, I then found that the middle section then dragged a little, being mostly about the police trying to identify the dead woman, the narrative interspersed with Lucy getting to know the suspects and reporting back to Miss Marple occasionally.

Miss Marple is fairly peripheral to the story. She appears at the beginning and she talks with Lucy a few times, but she remains mostly in the background, allowing Lucy to do all the snooping. Miss Marple then pops up again in the final chapters to reveal whodunnit. The ending is a bit of a surprise, as it seems Miss Marple’s solution comes virtually out of nowhere. I don’t think Christie really played fair with her readers in this novel according to the conventions of Golden Age mysteries which were well-established by this time. I doubt any reader really could work out the murderer and his motive. All we are left to do at the end is admire the way Miss Marple figures out the convoluted plot. I did make a guess at the murderer, but only because he seemed to be under no suspicion at all, but the motive came completely out of the blue. I think my main problem with the story is that there isn’t really very much detection in it: Miss Marple's solution seems more like inspired guesswork than anything else.

The reason for Miss Marple entrusting most of the work to Lucy is because she feels she is getting too old. Not that she lets her perceived bodily weakness stop her. There are five more Miss Marple novels after this, along with a couple of short story collections. We are given a few descriptions of her: “everybody in St. Mary Mead knew Miss Marple; fluffy and dithery in appearance, but inwardly as sharp and as shrewd as they make them”; also, “though in speech Miss Marple was woolly and diffuse, in mind she was clear and sharp.” In the opening chapter she is called “an elderly frail old lady.”

I also searched for a description I remembered of Miss Marple from Murder at the Vicarage: “Miss Marple is a white-haired old lady with a gentle appealing manner – Miss Wetherby is a mixture of vinegar and gush. Of the two Miss Marple is the more dangerous.” Murder at the Vicarage was published in 1930, 4:50 From Paddington twenty seven years later. Miss Marple is already an old lady in the first book, so she has incredibly longevity, and we can excuse her for feeling like she needs someone younger to do the legwork for her in this book. But by the time we get to Sleeping Murder in 1976, the last of the Miss Marple novels, she seems to have a new lease on life, as she is described as, “an attractive old lady, tall and thin, with pink cheeks and blue eyes, and a gentle, rather fussy manner. Her blue eyes often had a little twinkle in them.” With the passing of another nineteen years, it’s remarkable that Miss Marple is capable of getting around anywhere, let alone have all her wits about her to solve a murder. It’s been years since I read Sleeping Murder, but my recollection is that Miss Marple takes a fairly active role in it. Christie certainly wasn’t consistent in the aging of her elderly sleuth!

You could say I’m being overly fussy with looking at how Miss Marple ages, and possibly suggest, instead, that the books are not set contemporaneously with their publication. But they very obviously are. One of the things Christie does incredibly well is capture the change in English domestic life as her books progress. In 4:50 From Paddington the post war environment is captured in detail: the former grand estate falling into disrepair when the owners have neither the money nor the staff to maintain it; the impossibility of getting servants to maintain a large house; the problems of high income tax drastically reducing previously good incomes, Christie captures it all.

One thing that really strikes me with this book is how frequently Christie sets her stories among large(ish) families where many of the family members are unpleasant and where no one seems to like each other very much. It’s a setup she uses in many of her books. The family in this one consist of a miserly father (Luther Crackenthorpe), his dutiful daughter who looks after him at the family estate (Emma Crackenthorpe), and Emma’s three brothers who visit frequently. The brothers are Harold (in the City, married to an Earl’s daughter), Alfred (black sheep of the family, always involved in something dodgy) and Cedric (unsuccessful artist who lives abroad). We also have young Alexander, son of another sibling, Edith, who is dead. Alexander’s father is also around, Bryan, former RAF pilot, in need of someone to look after him. Emma seems like a nice person, but her brothers are an unpleasant bunch. Bryan also seems a nice character, but he’s rather hapless and just seems lost in this post-war world. Alexander and his friend, James, are probably the most agreeable characters, embracing the murder with enthusiasm, spending their days after the body is found searching the estate for clues.

“No, you can’t,” said Inspector Bacon… “Have you ever seen a blonde woman wearing a light-coloured dyed squirrel coat anywhere about the place?”

“Well, I can’t remember exactly,” said Alexander astutely. “If I were to have a look…”

“Take ’em in, Sanders,” said Inspector Bacon to the constable who was standing by the barn door. “One’s only young once!”

I was a bit surprised at Inspector Bacon’s giving in to their ghoulish desire to see the body, but their attitude very much reminded me of the Famous Five, with their enthusiasm for a mystery.

This isn’t one of Christie’s best mysteries, but it’s not her worst either. It’s a fun story, but it’s understandable why this isn’t regarded as one of her classics, even with the great opening.

Miss Marple on the Screen and Television 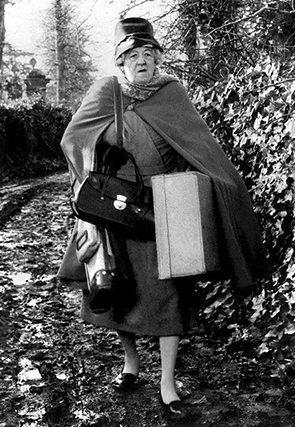 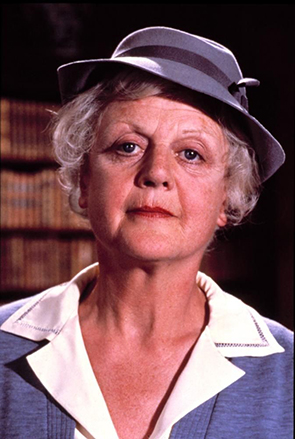 Angela Lansbury
Angela Lansbury played Miss Marple in the 1980 adaptation of The Mirror Crack'd. Several years later Lansbury starred as Jessica Fletcher in the long running TV series Murder, She Wrote. She described her character as an American Miss Marple. 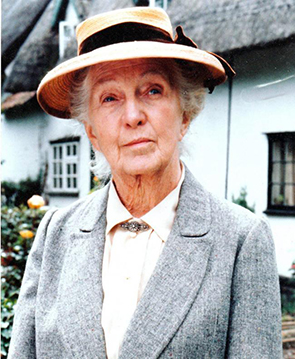 Joan Hickson
Joan Hickson appeared in the Miss Marple TV series between 1984 and 1992, including 4:50 From Paddington in 1987 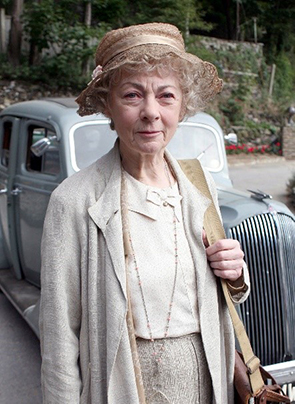 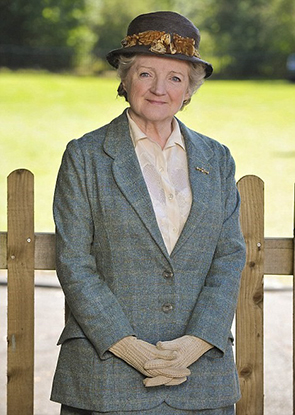 There have been a few movie and TV adaptations of this book, including this interesting Japanese anime (it’s done in four parts, this clip is part 1)