The beginning of the year felt a bit strange for me. With the lifting of Covid regulations in our state our whole family inevitably caught Covid (I’m double-vaxxed but it had been over six months since my shot and I was due for a booster shot two days after I came down with symptoms) I was able to tick off all the symptoms for Omicron, and even as I began to recover I was left with a terribly sore throat and a severe cough. During the worst of it, I spent days without reading or writing anything. It was that that made me feel the month was slipping away with little being done.

But the reality is that January was a fairly productive month for our website. We started a YouTube channel and produced three videos (even if somewhat poor and rarely watched), we did our first author interview with Michael Duffy, and both Toriaz and I still managed to review five books each. WaywardWoman, as always at this time of year, is busy with the beginning of the school year, but she intends to get back to reading after the first fortnight of school is over.

I also received another shipment of books from booktopia the other day. I’ve been adding to my Charles Dickens collection with some of his more obscure works. This is for the Charles Dickens project, which is a bit unofficial since I haven’t produced a page or placed it on the menu yet. I am still waiting for two more volumes (his American Notes and journalistism), but these came via courier the other day: 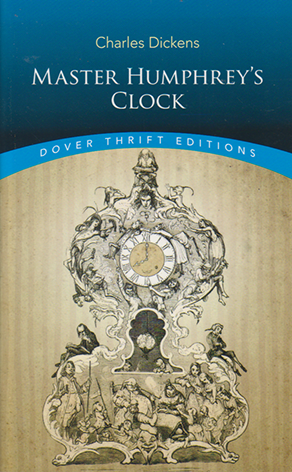 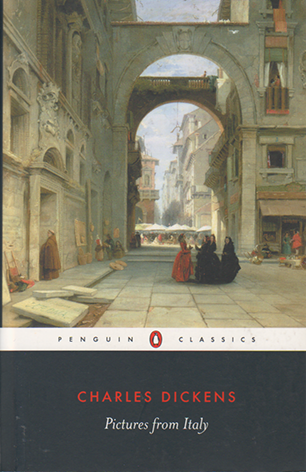 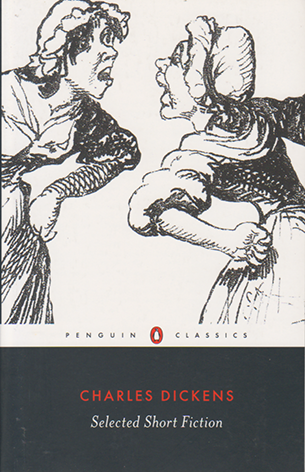 I also received a copy of Henry Fielding's Tom Jones with the same shipment. I read Shamela and Joseph Andrews by Fielding years ago, but have never read his most famous work. It's a long book, so I hope to fit it into my busy reading schedule sometime in the future. 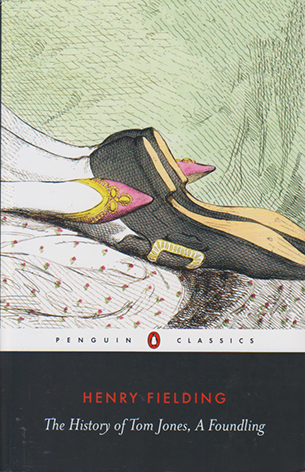 I had the idea to read all of Charles Dickens’s novels last year. I already had a number of the books, since I’ve read a fair bit of Dickens in the past, but I wanted a fresh set to read/reread and make notes in, so I ordered all the novels. Then I thought that it would be good to read Dickens’s lesser known works as well, so I’ve been collecting those together, too. This morning, the last two books I had on order, Selected Journalism 1850 – 1870 and American Notes arrived via courier: 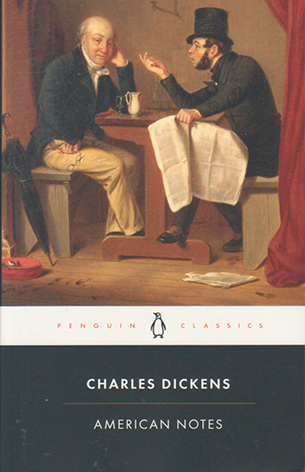 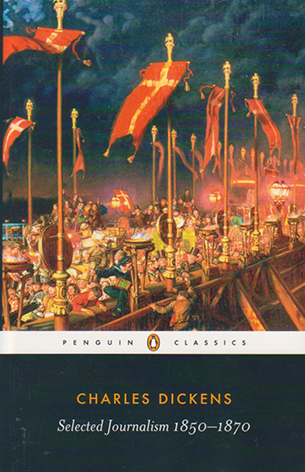 Selected Journalism 1850 – 1870 is so little in demand that not even Penguin keeps stock of it. This was a print on demand deal, which is the reason this one took longer to get to me. Booktopia, the Australian site I use, also had to order in American Notes.

About the only thing I haven’t ordered now (apart from many individual short stories which aren’t in my Penguin Classics selection of short stories) is Dickens’s History of England. I have it as an old Collins hardback, but it is fragile, so I might order that, too, in the near future.

Over thirty years ago I went with a group of friends from my honours year to stay with one of our group at his house in Bowral at the end of the year. (Cricket fans might remember that Don Bradman lived in Bowral). During that weekend we took a trip to Berkelouw Book Barn, south of Bowral in Berrima, where I managed to buy a bunch of hard back editions of John Fowles to replace my scabby paperbacks. Sadly, while I have many times had reason to pass through the Southern Highlands, I’ve never since been back to the Book Barn.

Toriaz suggested I accompany her to a Parkrun in Goulburn, with a stop at the Book Barn on the way back. It was great to see the place again. It’s nothing like I remember it. Not being a wine drinker, I forgot that the place had a vineyard and that they sold wine around the back. Inside seemed entirely different. The middle of the Barn was occupied by dining tables, and while we were there they gradually filled with people enjoying lunch. All the shelves seemed higher, no doubt to compensate for the culinary venture. It even seemed like a different building. It’s hard to know whether it was just my memory or the passage of time that has changed things, since I didn’t take any pictures when I was first there.

For the record, I actually only bought one book, Peter Ackroyd’s biography on Charles Dickens. There were so many other books that were tempting. Toriaz, on the other hand, bought a bunch of early green Penguins, since she has an interest in collecting them and the early orange Penguins, as well as a few other books.

Berkelouw’s Book Barn is set in a beautiful part of the world. It sells a small selection of new books, but it has a huge range of second hand and antiquarian books. If you love books and you happen to be travelling in the region, a side trip would be a great reward. I thought I’d put up a few pictures up, since the place is pretty. I’ve also put a panorama shot in the carousel at the bottom of our main page of the exterior of Berkelouws. 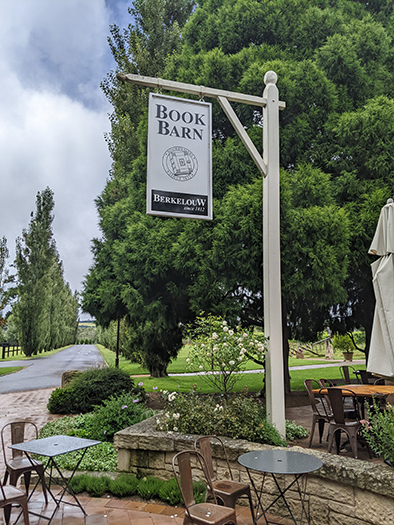 This picture shows the driveway into Berkelouw Book Barn, past the vineyard. The unreadable text at the bottom of the sign says that Berkelouws has been operating since 1812: this is when Soloman Berkelouw sold vellum-bound theology books at the port of Rotterdam, Holland. 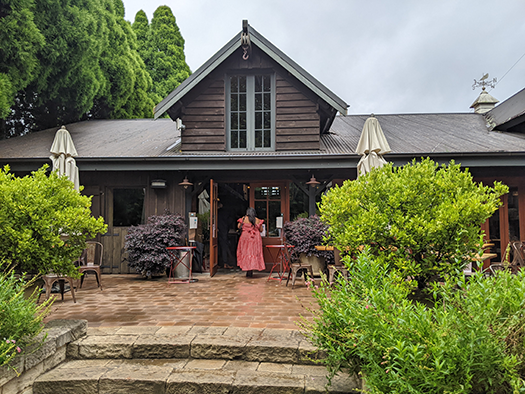 The entrance to the Book Barn. This is nothing like I remember. A wider shot of this entrance currently appears in the carousel of images at the bottom of our main page. 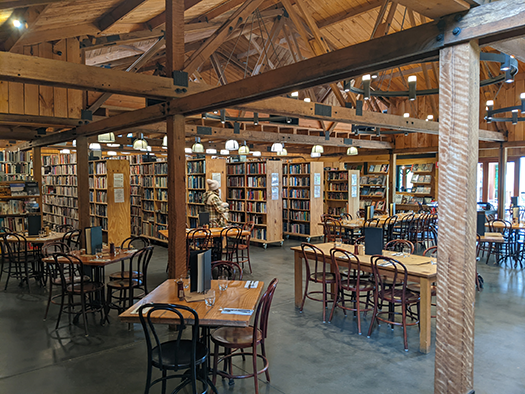 The Berkelouw dining area in the middle of the barn. This is new since my last visit. 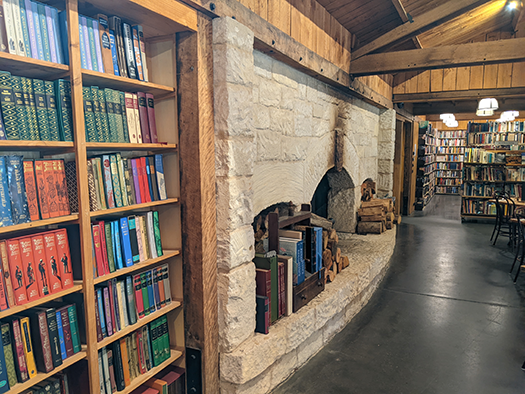 I like Folio Society editions, and the Book Barn has two shelves devoted to Folios either side of this fireplace. Other Folios can be found on the shelves throughout. 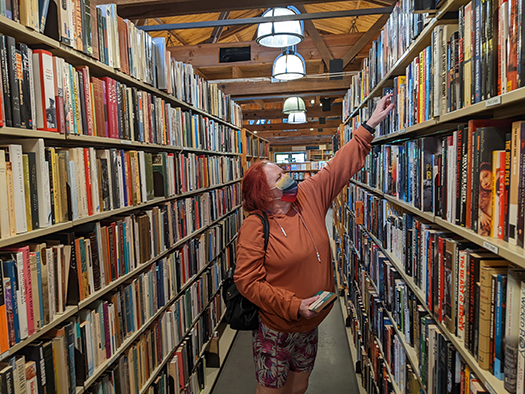 Here Toriaz explores the shelves. Notice the green Penguin she is holding. She was to add a number more books to this before we left. 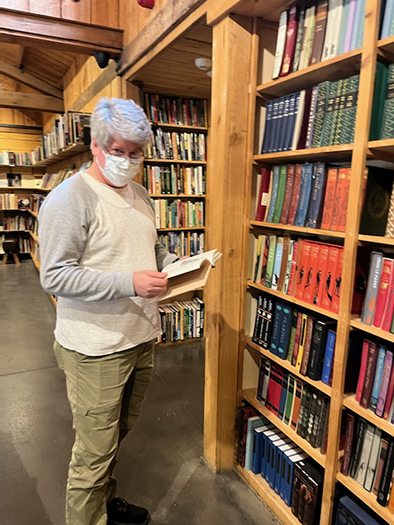 Here I am as I peruse the Folio Society editions. I managed to resist their charm and only left with one book!

I received another book delivery today: Romola and Daniel Deronda by George Eliot. On a whim I decided to read all of Eliot’s novels as I am reading all of Dickens (I’m currently reading Barnaby Rudge). However, I’d read a fair number of Dickens’s novels before I decided to start on that project. Somehow, I’ve never read George Eliot, not even at university. Today’s delivery means I’m waiting for only two more books: Scenes of Clerical Life and Felix Holt: The Radical (I’ve already purchased Middlemarch, Silas Marner and The Mill on the Floss a few months back). Since I want to read them in order of publication, I will have to wait until Scenes of Clerical Life arrives. 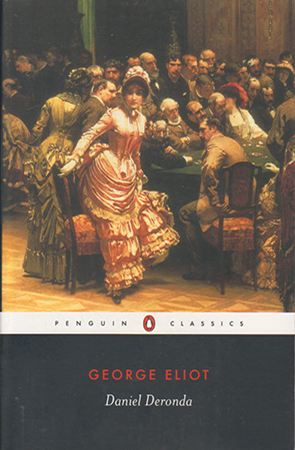 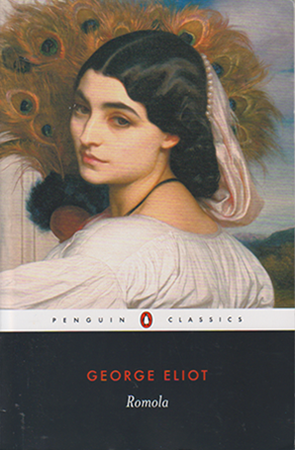 The number of little reading projects I’m trying to push along is starting to get silly!

Earlier this month I reviewed Art Spiegelman’s Maus after it was banned by the Tennessee school board. I was listening to a story about the issue of banned books in the American school curriculum this morning and heard someone speak about the efforts of a group of suburban women to try to reverse some of the bans. Through their website, Red Wine & Blue, they have tried to harness the political power of suburban women since Trump came to power in 2016. They have also created a page on their site which charts the banning of books through an interactive map that takes you to different articles about the issue in each state. The map identifies permanently banned books, books that are temporarily banned, as well as showing where bans have been requested. On a more positive note, it also shows where bans have been reversed. Click on the image below, or click here, to view the page. 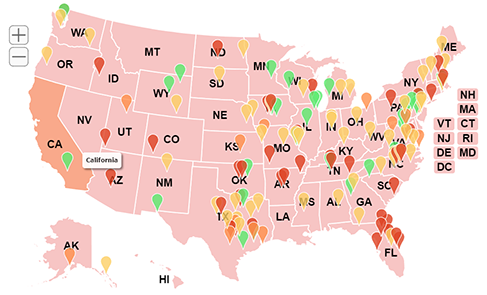 I finally got around to looking at the index for the Federalist Papers project this afternoon. I finished the last paper in December 2019, before any of us knew about Covid-19, and since then the index has remained blank except for a promise that I would get around to doing it.

I thought about it again last week and decided I didn’t have time for it. But that’s a situation that’s never likely to change, so I decided I just needed to find time. Part of the problem is that to do it I will have to read the Federalist Papers again. At least it will provide me an opportunity to check what I have written and amend any mistakes. Given this, the index should grow, like everything on this site, very very slowly.