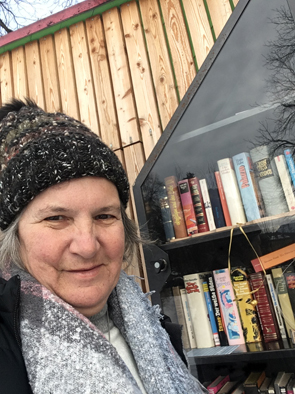 WaywardWoman has sent two more panoramic shots over the last few days, one from Austria and one from Switzerland, which now form a part of our slides at the bottom of the main page on this site. They are some of the best shots we have so far on the theme of reading in various settings. This is a picture of her looking very cold next to the book nook that is the subject of the Austrian panorama. Hopefully she'll manage to send at least one more picture before she returns to Australia next week. 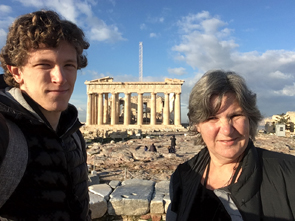 WaywardWoman sent me this photo from the Parthenon yesterday. She also had a panoramic shot taken of herself next to the Parthenon for the footer of the front page of this website, but it was sent to me in too low a resolution to be used. It might have to wait until she gets back. I've also been sent shots of snow fall in Greece. Meanwhile, the rest of us weather out another Sydney summer, trying not to drip sweat on our books! 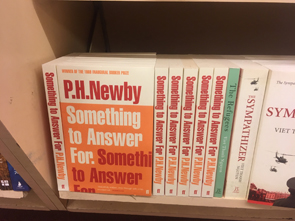 I went to one of our major stores in Sydney yesterday and saw two sets of shelves I decided to photograph. First was the inaugural winner of the Booker Prize in 1969, P.H.Newby’s Something to Answer For, which I reviewed in July last year. At the time I had to order the book because no bookstore in Sydney had it. Our Sydney bookstore tried for a month and couldn’t find a copy overseas and asked whether I wanted them to continue looking for it. I said yes. Eventually, they tracked down a copy. It was the last of all the Booker Prize winners I acquired for our Man Booker Prize Project. Now, I saw a stack of copies on Dymocks’ bookshelves. Yes, there were so many they were also on the shelf above! 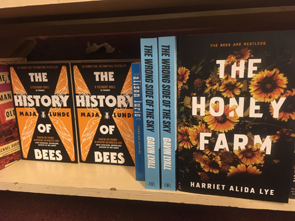 Second, was just an amusing observation I made. I spotted Maja Lunde’s The History of Bees very close to Harriet Alida Lye’s The Honey Farm I didn’t buy either book, but I thought it was interesting that two different publishers have recently released books with such similar themes using similar colour schemes. 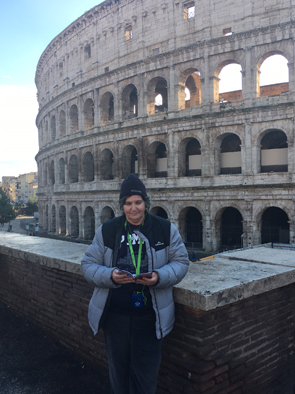 I thought I’d include this picture of WaywardWoman in our Blog. She’s in Europe at the moment. She decided to take this shot of herself outside the Colosseum for our changing footer shots at the bottom of our main page, which always include the subject of reading at different locations. Unfortunately, she didn’t realise it had to be a panoramic shot, so she assures me she’ll try to get something suitable when she heads for Greece.

The Reading Project has made it to its third year! We started working on this website on New Year's Day, 2017. The first site lasted three months until I decided we should change the domain name. I didn't realise back then I could do that without creating a new site, so we moved everything over to this site and I had to change all the links by hand. I'm sure more technical types could tell me a better way to do that.

Thanks to all those who have ever read any of our reviews. I know there are a few people who look back at the website from time to time, so thank you for coming back.

In 2019 we'll try to just continue what we've been doing, since I feel the website has clear aims which we have been achieving - to write book reviews! When I get time I'll try to update the main page and introduce a few more improvements wherever I can.